A "Plan for Planting Prospect Hill" 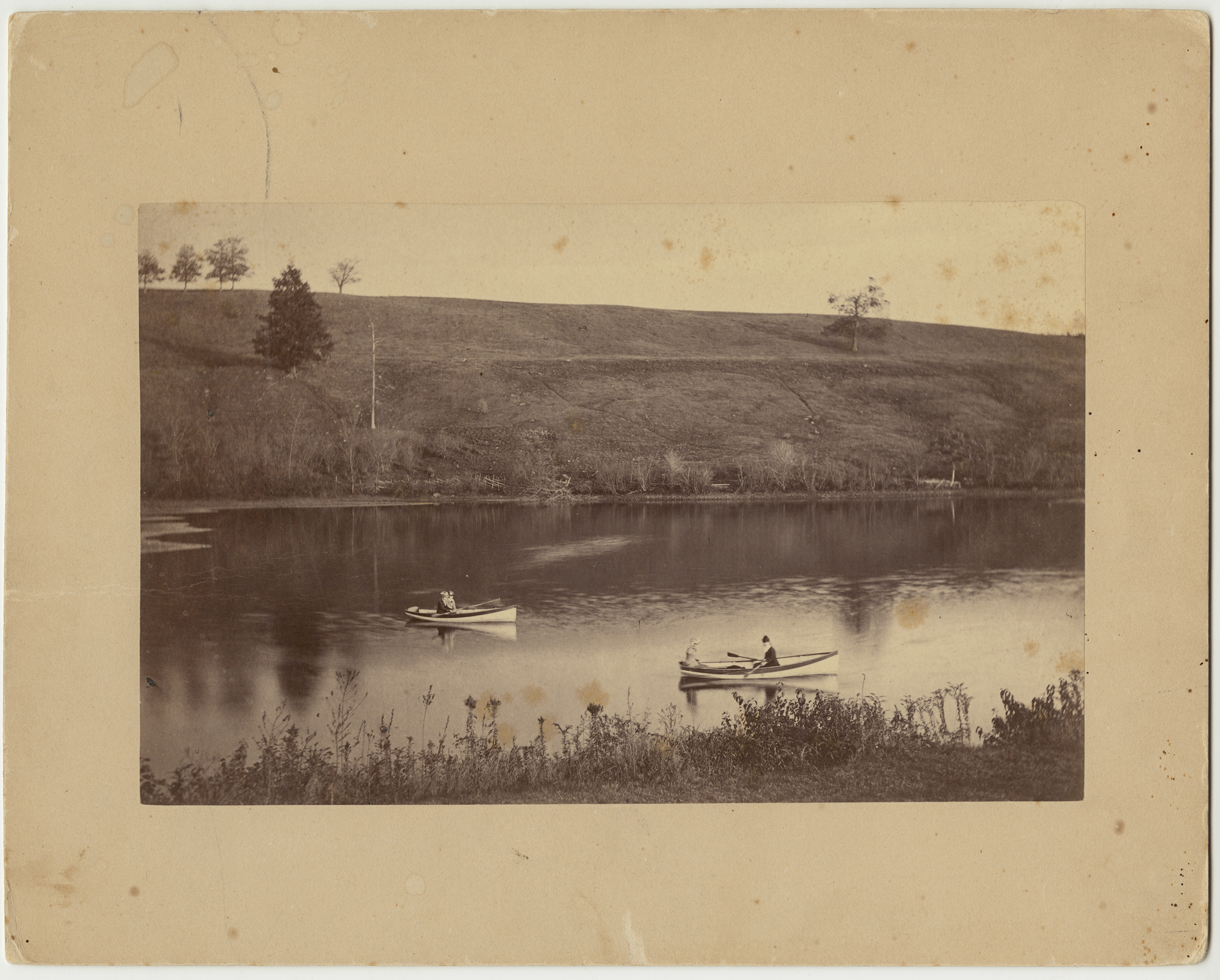 This brief history begins in 1879 with a flurry of activity along Stony Brook and Lower Lake, then called simply “the pond” or “the lake.” In that year a boathouse was built for $200 on the campus bank of Stony Brook just before it widened to the pond. It soon led to popular “canoeing” in slender rowboats. By 1880, Julia E. Ward, the Principal (head of the Seminary), had made it known that Prospect Hill would make a valuable addition to the campus. It was mostly open land with only an occasional tree. It rises above the lake in Canoeing on Lower Lake, 1880-82, where cow paths wind down to the water. Miss Ward touted the views from the summit of the hill––its “prospect”––and saw the possibilities of landscape gardening. Between 1879 and 1882, the Seminary purchased successive parcels of Prospect Hill thanks principally to the gifts of Edward Augustus Goodnow (1815-1905), a banker and philanthropist of nearby Worcester; the new park was named after him. 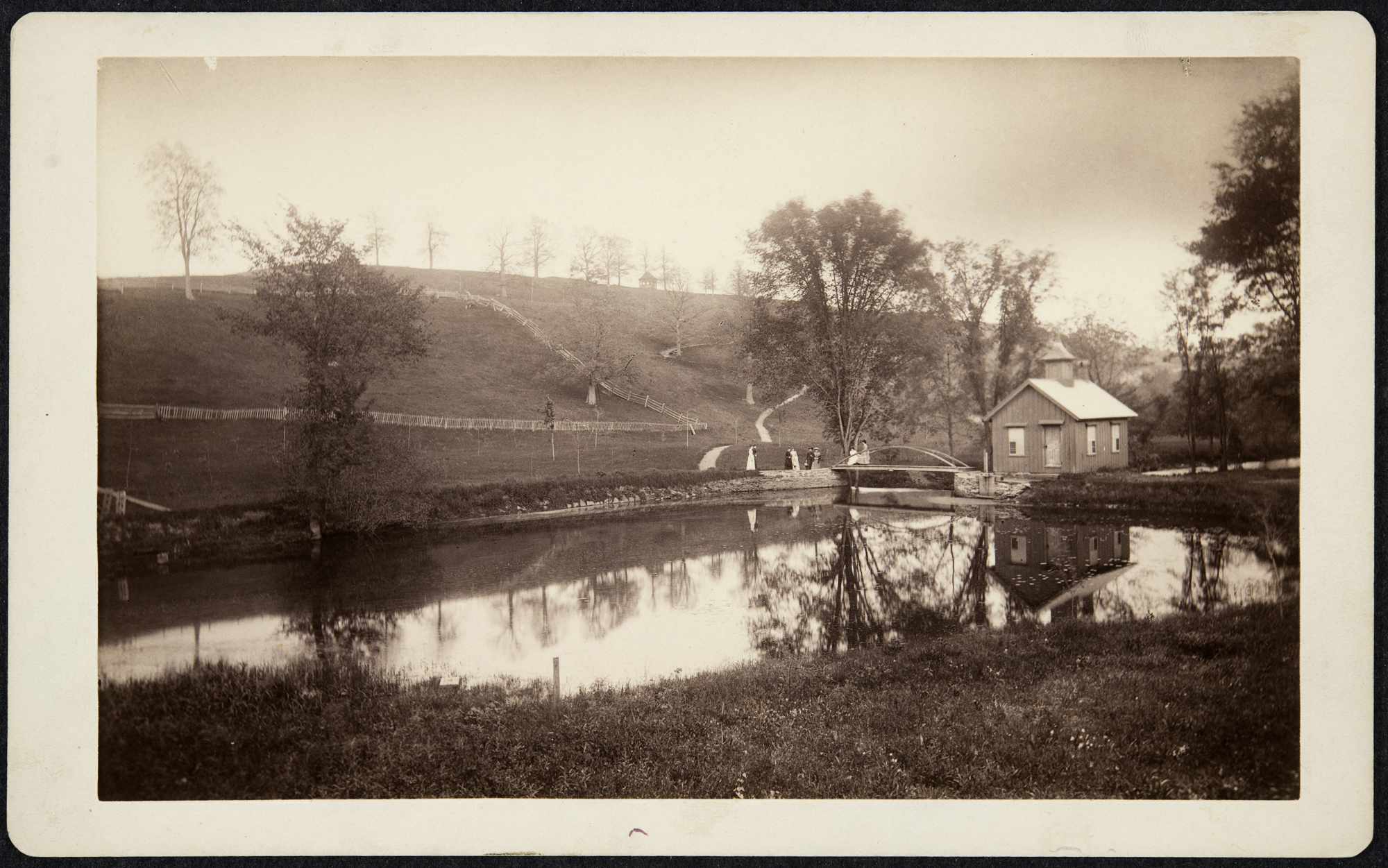 The Seminary commissioned a “Plan for Planting Prospect Hill” from Ernest W. Bowditch, a Boston landscape gardener (later the designer of the grounds of The Breakers, the Newport mansion). The large hand-drawn plan shows a “Carriage Way” that winds up to the top of the hill from the northeast bank of the millpond. A separate footpath (it did not follow the plan), began at the bridge over Stony Brook alongside the Pump House (which sent water up to the Seminary building) and rose up the slope past the future site of Willits-Hallowell. In Prospect Hill and Pump House from Northwest, 1884-86 we see the footpath as it undulates up the pasture, by now Goodnow Park. (The fenced-off pasture on the left was still private property.) 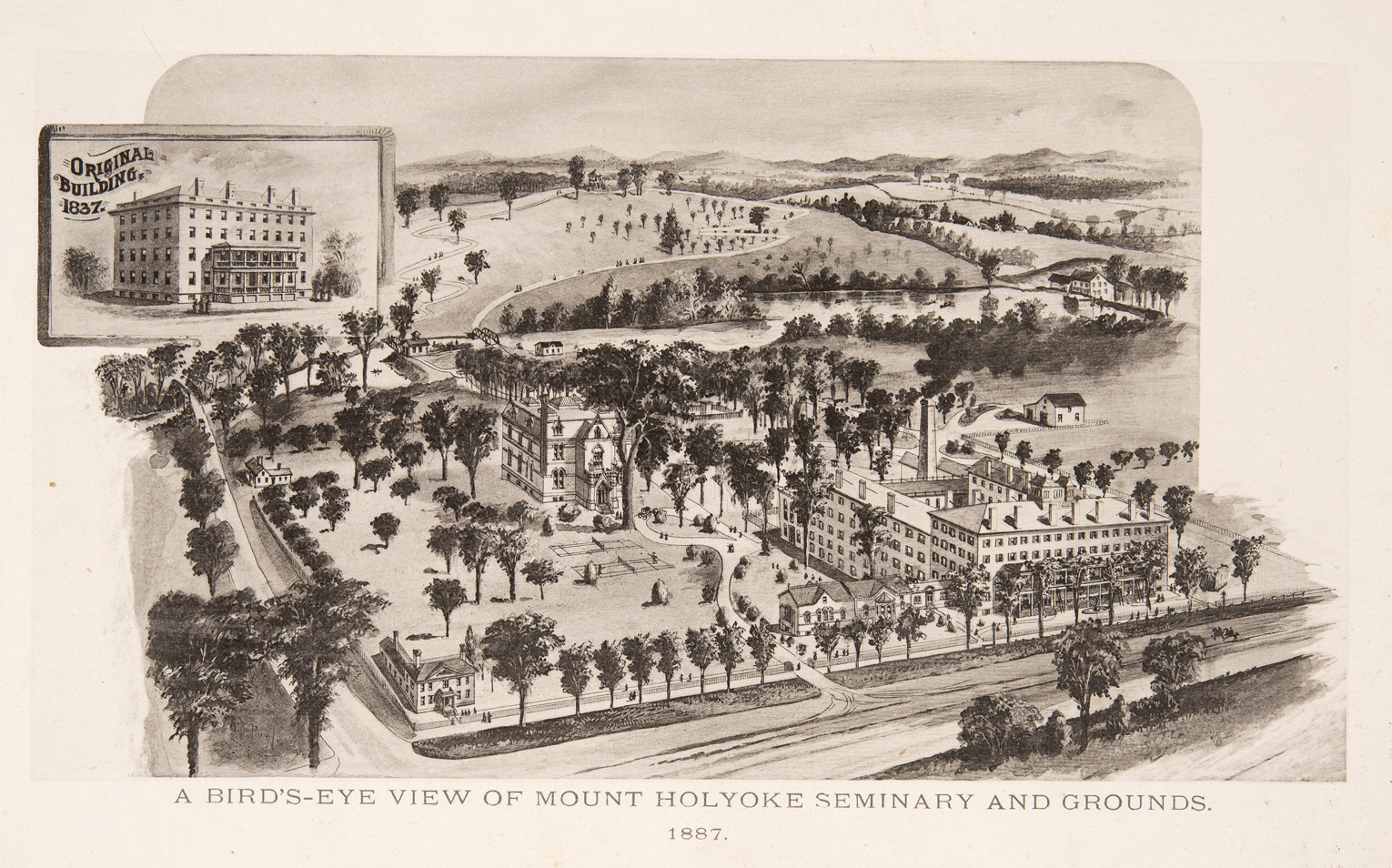 A Bird’s-eye view of Mount Holyoke Seminary and Grounds, 1887

In a Journal Letter of May 19, 1882, mailed to the alumnae, the college librarian Mary O. Nutting wrote “Some thousands of baby trees, of various kinds, are already planted in a nursery just north of the botanical garden; from which, year by year, the more advanced will graduate, and be transferred to permanent positions in Goodnow Park. . . .” These show in a lithograph published in 1887, A Bird’s-eye view of Mount Holyoke Seminary and Grounds, 1887. Only five years after the founding of Goodnow Park, trees and bushes mark the once bare hill, and we can trace both the footpath and their bridges to their juncture at a pavilion on the summit.

Festivities at the Pepper Box →
A "Plan for Planting Prospect Hill"