Supporters of the Prohibition Party Marching, 1904

Supporters of the Prohibition Party Marching, 1904

This photo shows Mount Holyoke students marching in support of the Prohibition Party which was nationally headed by Silas Swallow in the 1904 election. The main belief held by the Prohibition Party was temperance—opposition to the sale or consumption of alcoholic beverages. These Mount Holyoke students hold torches, wear paper pitchers on their heads, and wave signs featuring doves and ‘peace’. Written on the original photo was the chant “Prohibition! Prohibition! We’ll turn our glasses upside down and down with the red, red wine!”

Image Description: Many students variously attired and holding signs congregate outside a brick building; one student peers down at the parade from a window on the second story. Several of the students wear matching blouses, white skirts, and paper “pitchers” on their heads. Some carry torches aloft; others posters of pitchers or advocating for “peace.” Most are not readable due to overexposure. Some students are clad in all white with cylinders of paper worn as masks with cutouts for their eyes, nose, and mouth. Others wear military garb over their dresses and have mustaches and goatees drawn on their faces. The line of students continues on in a blurry and semi-indistinguishable fashion. In white ink in the photo’s upper right corner is written “‘Prohibition! Prohibition! / We’ll turn our glasses upside down / And down with the red, red wine!’” 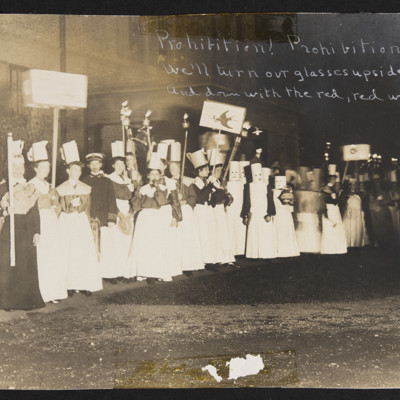