Before Mount Holyoke’s mock national election, where the student representatives from each state would meet to vote, the students held a mock state convention. In a letter at the time, a student explains that at this mock convention, students were organized by their residence hall, each of which represented a state. This photo from 1908 shows the “state convention.” The states represented in this photo are Kentucky, Texas, Nebraska, New York, and Massachusetts, but it is possible that others are out of frame. There is no clear indication of why these states were chosen to represent each residence hall, as many of these states are not representative of the Northeastern student population.

Image Description: Hundreds of students crowd an early Blanchard Hall. Most stand on the ground floor among rows of wooden chairs, but many others watch from the balcony on the upper floor; those in the first row sit at the floor’s edge, clutching the railing as their feet dangle. The photographer likely stood on the balcony as well to obtain the view of the action. Thirteen other students, some dressed as male candidates, stand upon the stage at the background of the photo. Students within the crowd hold banners for Kentucky, Texas, Nebraska, and Massachusetts, and posters for Ohio and New York (represented by the state seal). At the top of the photo, gymnasium ropes, twisted out of the way, are visible. 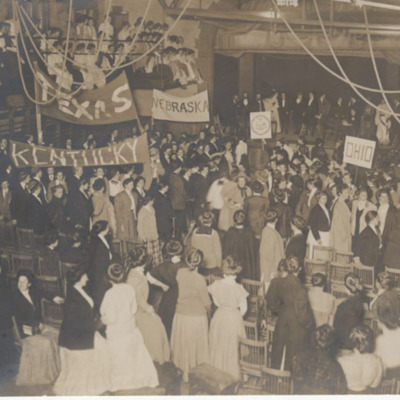