President of the National College Equal Suffrage League as a senior, Louise Dunbar ‘16 often appeared with a sign bearing the text: “SHOW YOUR FAITH IN THE WOMEN OF MASSACHUSETTS: VOTE YES ON THE AMENDMENT ENABLING WOMEN TO VOTE.” Although the League was founded for primarily educational purposes rather than political goals, Louise’s insistence on carrying her sign reflected her personal political agenda. The poster accompanied Louise to the 1915 Massachusetts state election where she proudly stood 150 feet from the polls in deference to state law, which prevents individuals from soliciting votes for a person, political party, or position within that distance. The photos also memorialize the activism of League members Florence Gorse ‘16, Florence Tuttle ‘16, Margaret Wallace ‘16, Evelyn Winship ‘16, Helen McConkey ‘18, and Dorothy Phelps ‘18. The album is the largest single source of photographs of Mount Holyoke’s suffragist activity.

Image Description:
1. Louise Dunbar stands alone before a crowd of people wearing her black cap and gown over a white dress. She supports her "VOTE YES" sign with her right hand and grips it with her left fingers, looking meekly from the left corner. An unidentified brick building stands behind her. Other members of the mingling crowd appear to hold banners of unclear purpose as well.

2. Two women stand curbside on an unidentified street; barren trees and buildings are visible behind them. They both wear long coats and hats. The woman on the left clutches a pole bearing the American flag in her right hand. The photograph has been retouched to add color to the blue background and red stripes of the flag. Louise stands to the right smiling brazenly. Her “VOTE YES” sign is attached to a pole, and she supports the poster with both hands. Her jacket also appears to have a hint of retouching, as if a fawn color, although it may just be debris. The photograph’s border is inscribed “150 ft. from the polls - Nov 3” in black ink. The black album page reads “P. Towle, L.B.D.” in white ink below the pasted image.


3. Louise Dunbar stands on the icy sidewalk outside the brick curve of the Fidelia Nash Field Gate. In the background the snowy grounds outside Mary Lyon Hall, Abbey Chapel, and Williston Library are visible. Louise wears a brimmed hat and a belted wool jacket over her ankle-length dress. She holds the “VOTE YES” sign to her left and a tin bird in her gloved right hand. She observes the bird, which was likely one of the blue birds issued by the Massachusetts Woman Suffrage Association to support the 1915 Massachusetts referendum. The shadow of the photographer, wearing a similar hat as Louise, is visible in the foreground above Louise’s skirt. The album page reads “Posing for Llamarada picture” in white ink.

4. Three students stand on a curving sidewalk on campus — probably by Abbey Chapel, with Pearsons Hall visible in the background at right. All three wear white boots and cardigans buttoned over their white dresses. Triangular paper hats and unique “Votes For Women” sashes complete the ensemble. Florence, left, holds a bugle to her lips while Helen, center, smiles broadly and uses drumsticks to tap a beat on the drum at her waist. Dorothy, right, squints at the camera with hands in motion as if she intends to raise her own bugle. In the grass at right stands a small wooden table topped with papers (likely pro-suffrage flyers) which flutter in the breeze. Felt “Votes for Women” pennants, apparently handmade, hang from the table’s sides. The album page reads “F. Tuttle, H. McConkey, D. Phelps."

5. Four women cluster around the “VOTE YES” sign propped on a pole. Florence and Margaret at left wear complementing cardigans over white dresses and boots with handwritten “Votes for Women” sashes adorning their chests, bugles held at their waists. The pair gaze off in the distance at right, likely smiling for another camera. Louise and Evelyn, right of the sign, gaze at the photographer. Louise wears a black cap and gown over her white dress and leans her head against her sign as she holds it. Evelyn wears a light sweater over her white dress and holds a drum and drumsticks in her hands, crossed at the waist. Many people, mostly women, in fine dress swarm in the background in front of Abbey Chapel. Below the photo, the album page reads “F. Gorse, M. Wallace, L.B.D., E. Winship. Drum corp and standard bearer."

6. Louise Dunbar stands to the left of the photograph outside the Fidelia Nash Field Gate, with Mary Lyon Hall visible in the background. She stands at the edge of a snowbank in high contrast with her all-black ensemble: leather boots and gloves, an ankle-length coat, and hat. Her torso is partially obscured by her “VOTE YES” sign — she looks firmly at the camera over its edge. 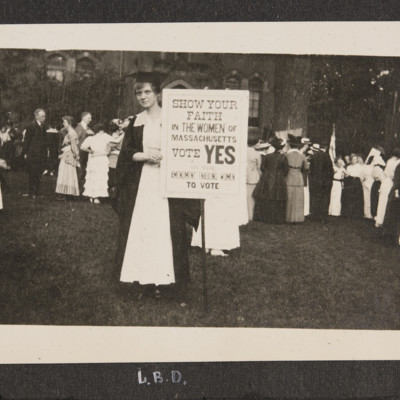 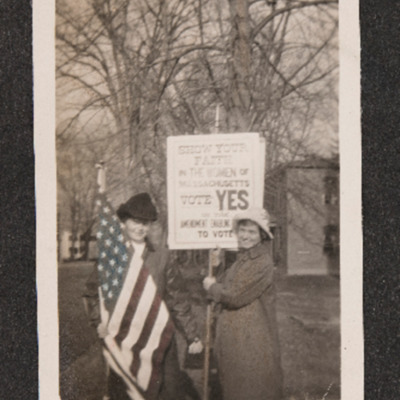