In these excerpts from Tiffany McClain’s ‘01 oral history project, Barbara Smith ‘69 discusses what it was like being a Black student at Mount Holyoke in the 1960s. Smith describes racist assumptions from professors about her academic ability as “violations to the human spirit.” She notes some positive changes that occurred during her sophomore year: the number of Black students at Mount Holyoke doubled, which led to the formation of the Afro-Am Society. This change allowed them to create a space of their own, but did not stop the racist attitudes of white students, faculty, administration, and Mount Holyoke as an institution. With the creation of the Afro-Am Society and rally behind a Black cultural center, the Mount Holyoke administration noted that they believed the students were separated from the rest of the campus. Smith described these actions as necessary— “to try to build some kind of space where we could feel safe, not hated, not looked down upon.”
In 1968, Smith attended the Democratic Convention in Chicago in which she describes the violence protesters faced at the hands of the police. Many activists from groups such as the Students for a Democratic Society and the Student Nonviolent Coordinating Committee were present at the Convention to protest the Vietnam War. Also in 1968, Smith was able to participate in a national election for the first time, in which she voted for Eldridge Cleaver, a member of the Black Panther Party who was running under the Peace and Freedom ticket. She believed voting to be a “duty to exercise the franchise no matter what” she thought “about the lack of choices.” 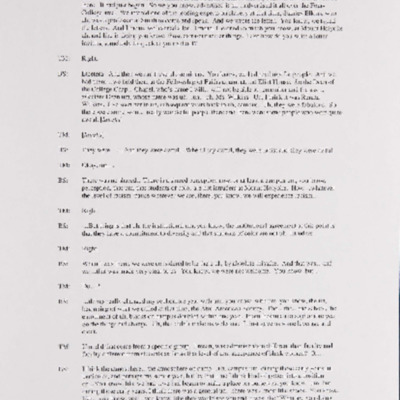