Florence Tuttle ‘16 (left), Dorothy Phelps ‘18 (center), and Helen McConkey ‘18 (right) formed a band of trumpets and drums on Suffrage Day May 9th, 1916. The three students wear ‘Votes for Women’ sashes, one of which is featured in this exhibition. As a senior, Florence was the vice president of the National College Equal Suffrage League at Mount Holyoke. When this photo was taken in 1916, the group had over 300 members on campus.

Image Description: Three students wear triangular paper hats, sweaters over white dresses, and “Votes For Women” sashes pinned across their chests. They are in the midst of marching outdoors — a brick building and trees are visible in the background. The student on the right marches slightly ahead wearing a drum harness with drumsticks in either hand; she smiles at the camera. The other two students at left and center walk slightly behind holding small bugles to their lips. The student in the center looks ahead as Florence, on the far left, squints at the camera. Her sash is identifiable as the one on display because of the matching letters. There seems to be another dress-clad figure behind Florence: only an elbow is visible. 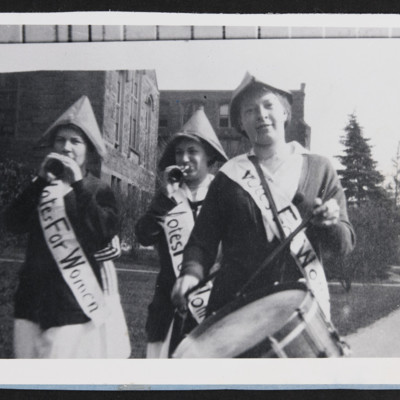