This yearbook page gives a brief history of the Mount Holyoke chapter of the National College Equal Suffrage League and details its activities. Through its open meetings, the League brought many important suffragists to speak on campus. Mentioned on this page are Dr. Anna Howard Shaw, who was the president of the National American Woman Suffrage Association from 1904 to 1915 and an advocate for non-militant tactics; Max Eastman, who was a male supporter of women’s suffrage and a prominent radical; and Mrs. Susan Walker Fitzgerald, the recording secretary for NAWSA who was later elected to the Massachusetts House of Representatives. The membership numbers listed on this page show that more than a third of the student body belonged to the League, although this figure does not capture students who may have attended meetings without becoming official members. 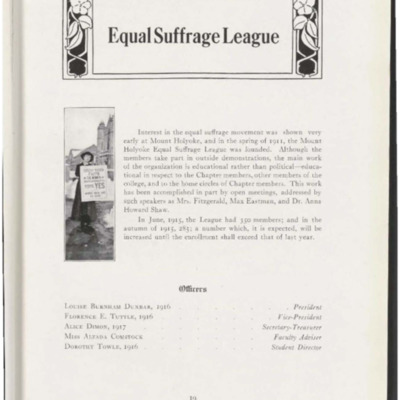