The yearbook page for the Fellowship of Faiths (FOF) also discusses the efforts of the Civil Actions Group, an unofficial sub-group of the large interfaith organization on campus at the time. Both groups worked together on a tutorial program in Holyoke, and the FOF held a Campus Conference on Civil Rights, focussing on the subtle nature of racial discrimination in the North. Whitney Young, pictured at the bottom of the page on the left, was the executive director of the National Urban League, a community-based organization dedicated to ending racial discrimination, gave a lecture at the conference. Mount Holyoke and Amherst Students in Washington D.C., May 15, 1964 A group of Mount Holyoke and Amherst students went to Washington D.C. to lobby for the passage of the 1964 Civil Rights Bill. In this photo, they are shown with Senator Keating, a member of the House of Representatives. Keating was influential in enacting the Civil Rights Act of 1957. 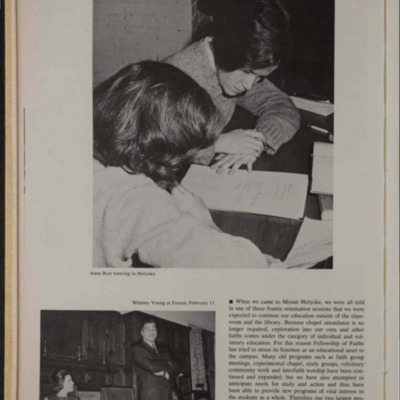