Suffragists used valentines and other holidays to spread their message to as many men as they could, since men would ultimately be the ones to write and pass a voting rights amendment. February 14th would later become a significant day for suffragists because the League of Women Voters was founded on that day in 1920.

Image Description: An illustration of a cherubic little girl dressed in a blue dress with red polka dots looks up from under her lashes. She holds the wooden handle of a cube-shaped sign in two chubby fists and braces it against her left shoulder. On the sign’s two visible panels is written “Votes for Women” and “Vote for me for a Valentine” in red text, with a heart below the latter. Her large white bonnet tied with a yellow ribbon masks the lower portion of the sign. Her torso is angled slightly toward the viewer but her feet, in black Mary Jane shoes and white socks, point left, as if she is in the midst of marching. 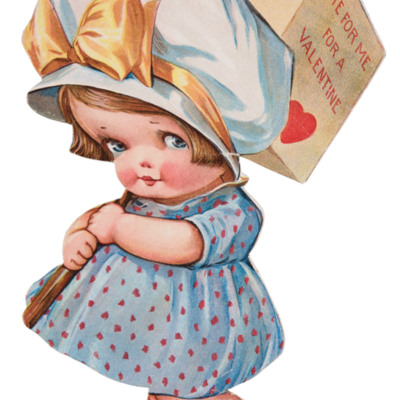