Before 1920, Mount Holyoke students held mock campaigns and elections in which they dressed up as the presidential candidates of that election year. These photos show students dressed as various figures from the 1916 national election including Woodrow Wilson and Charles Evans Hughes, as well as a donkey and an elephant to represent the Democrat and Republican parties.

Image Description: Two figures stand in the corner of a room; lace curtains and a framed picture are visible in the background. The figure on the left wears a full-body elephant costume comprised of an elaborate mask and a baggy jumpsuit. The mask has large flappy ears that fall to the shoulder. From the center of the mask protrude two white tusks and a long trunk which curls at the end. The tip of the trunk rests against the figure’s hands, folded at waist-height. On the right is a figure, presumably a student, clad in a full tuxedo. They have short curly hair and round features above a white collared shirt and black bowtie. Their right hand is tucked into the crook of the elephant’s elbow, and they hold a bowler hat and a long object - perhaps a cane - in the other.

The next picture is taken in the same corner, with the lace curtains and a framed photograph visible. Two students stand slightly off-center, with another kneeling at their feet. The students standing are both dressed as men in suits and tophats, with firm stances and their hands at their sides. The student on the left wears a beard, a cravat, and a black suit open over a white shirt. The student on the left wears a collared white shirt and a black jacket buttons over it. They both look upward into the distance; the glasses of the student on the right glint in the light and obscures the right eye. The student kneeling in the foreground wears a white gown and a long, buttoned robe with a dark collar. Upon her head is a realistic donkey mask, apparently rubber, with a long, detailed face and tall ears. It appears to be of a higher quality than the presumably handmade elephant costume. The student’s arms are folded and the hands disappear, either under the nose of the mask or into the mask itself. 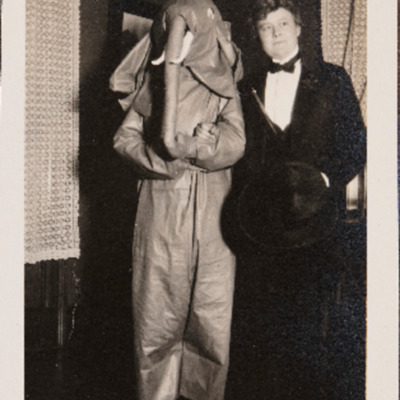