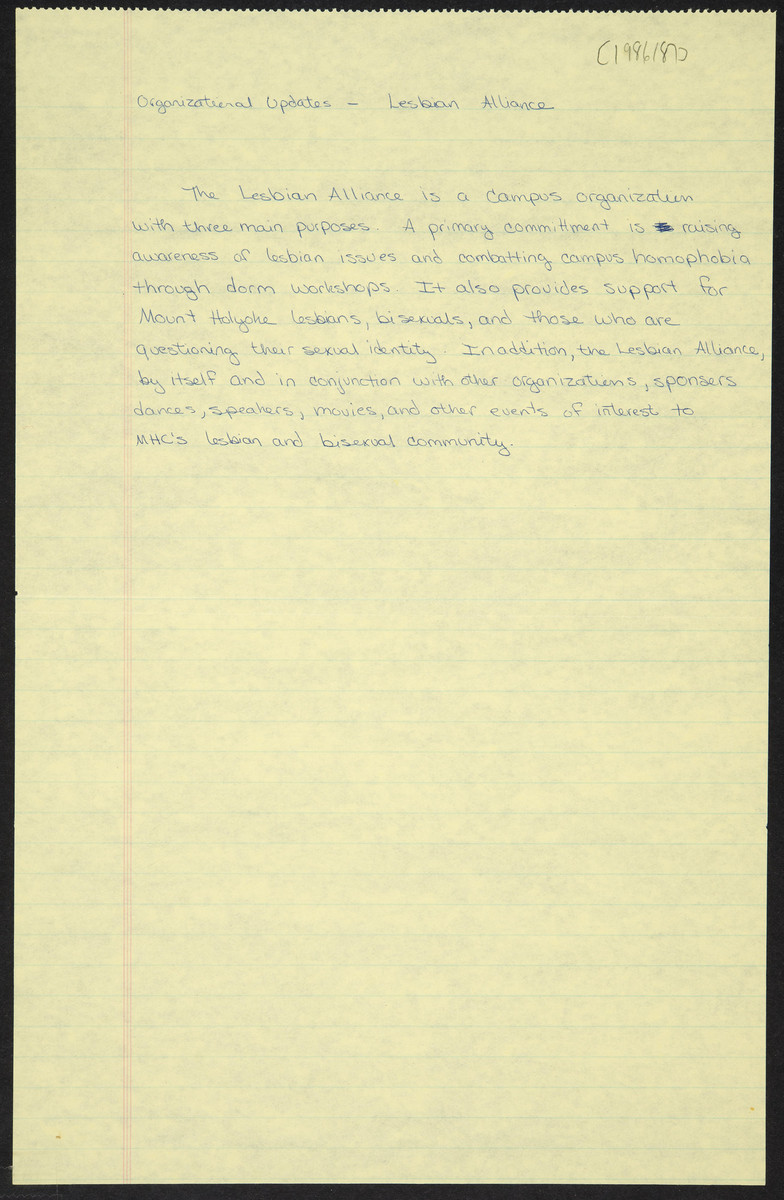 Handwritten mission statement from the Lesbian Alliance, circa 1986-87

Out of the Gay Support Group's weekly meetings in Eliot house grew the Lesbian Alliance. The budget request form the Lesbian Alliance (LA) submitted for the 1976-77 school year says that the organization was non-hierarchical in nature and its goal was to "provide for the emotional and social needs of gay women and women of different sexualities." During this first year, the LA was funded for $803.20 for entertainment, travel, lectures, stationery, and refreshments for the dorm workshops they held. Over the next decade the Lesbian Alliance's mission statement evolved to include bisexual and questioning women as well as lesbians. The first mission statement on record that includes bisexuals is that of the 1986 Lesbian Alliance.

There was a lot of pushback against the existence of the LA and of lesbian and bisexual women on campus in general. An all campus meeting was held November 12th, 1986 to discuss heterosexism and homophobia at Mount Holyoke College. The next day, on November 13th, the Lesbian Alliance's bulletin board in the post office was vandalized. Anti lesbian words and symbols were drawn all over the informational board and it was partially torn down. On November 18th, a banner depicting a "defaced lesbian symbol of two women" was hung from Skinner Hall. In response to these acts, the LA gave out pink triangles to students so they could show their support for lesbians and bisexuals at MHC. The pink triangle was worn by people categorized as homosexual in concentration camps during World War II.

Alums of Mount Holyoke were equally active in the struggle for a lesbian community. In 1986, Donna Albino '83 (current president of Mount Holyoke Lyon's Pride) submitted a letter to the fall Alumnae Quarterly. She said there was a need for "lesbian alumnae to be able to find each other" and that the construction of a lesbian alumnae network would be hugely beneficial. Responses published in the subsequent Alumnae Quarterlies varied greatly; some women wrote in to express enthusiastic support for the network and others were dismayed, threatening to not support MHC monetarily or attend reunions because the College was talking openly about lesbians.

The community conversations that were happening during the early to mid 1980s were crucial for a couple of reasons. For one, they showed just how much backlash lesbian, bisexual, and questioning women faced at MHC when they spoke out about their identities. While the 1980s weren't the first time conversations about women who love women were happening (see: Jeannette Marks and Mary Woolley's decades long partnership,) there was a new sort of institutional recognition of the topic. The College president at the time, Elizabeth Kennan, published a letter in The Mount Holyoke News, describing the homophobic banner as a "clear violation of our will and resolve to be a unified community." There were numerous letters to the editor published in the newspaper and the Alumnae Quarterly and people were openly talking about discrimination against lesbians.