← A Decade with Nothing
More to Add? →
Today and Tomorrow 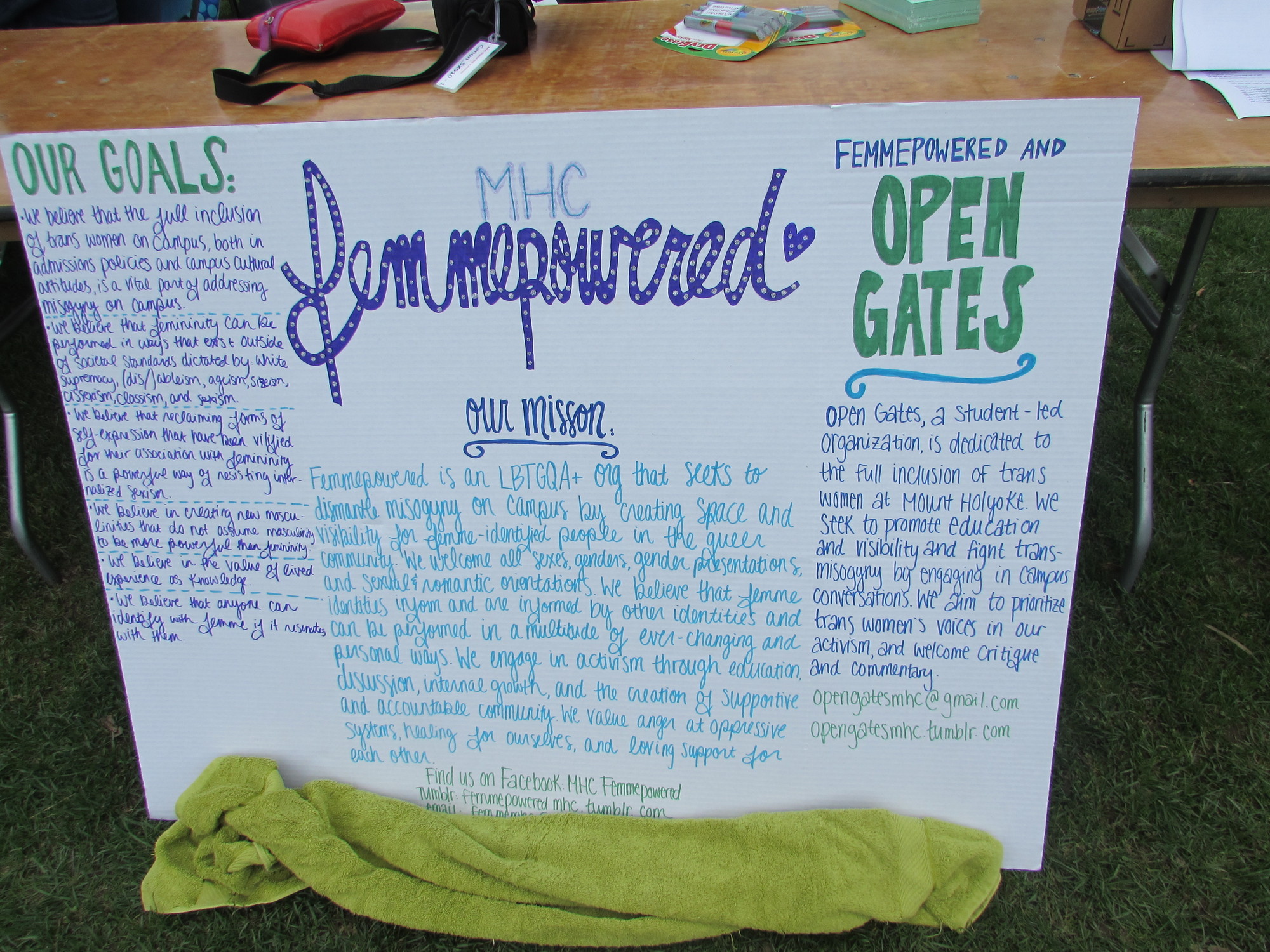 Today, there are four organizations that utilize the Marks House. They host events, collaborate with other student groups, and meet regularly to build a support sytem and community for LGBTQ+ students at Mount Holyoke.

Femmepowered was founded in 2012 in response to misogyny and femme invisibility on campus. The org holds weekly dialogue based meetings and end of semester restorative events. They also organized a concert in the spring of 2014 with femme lesbian singer Mary Lambert. Open Gates, under the Femmepowered umbrella, is an organization dedicated to the full inclusion of transgender women in the MHC community. After the historic trans admissions policy change, Open Gates has been working to create a welcoming and safe space for trans women. On Pangy Day 2014 and 2015, Open Gates hosted a photo campaign in support of trans women at women's colleges. Femmepowered's mission statement is as follows:

Femmepowered is an LBTGQA+ org that seeks to dismantle misogyny on campus by creating space and visibility for femme-identified people in the queer community. We welcome all sexes, genders, gender presentations, and sexual and romantic orientations. We believe that femme identities inform and are informed by other identities and can be performed in a multitude of ever-changing and personal ways. We engage in activism through education, discussion, internal growth and the creation of supportive and accountable community. We value anger at oppressive systems, healing for ourselves, and loving support for each other. 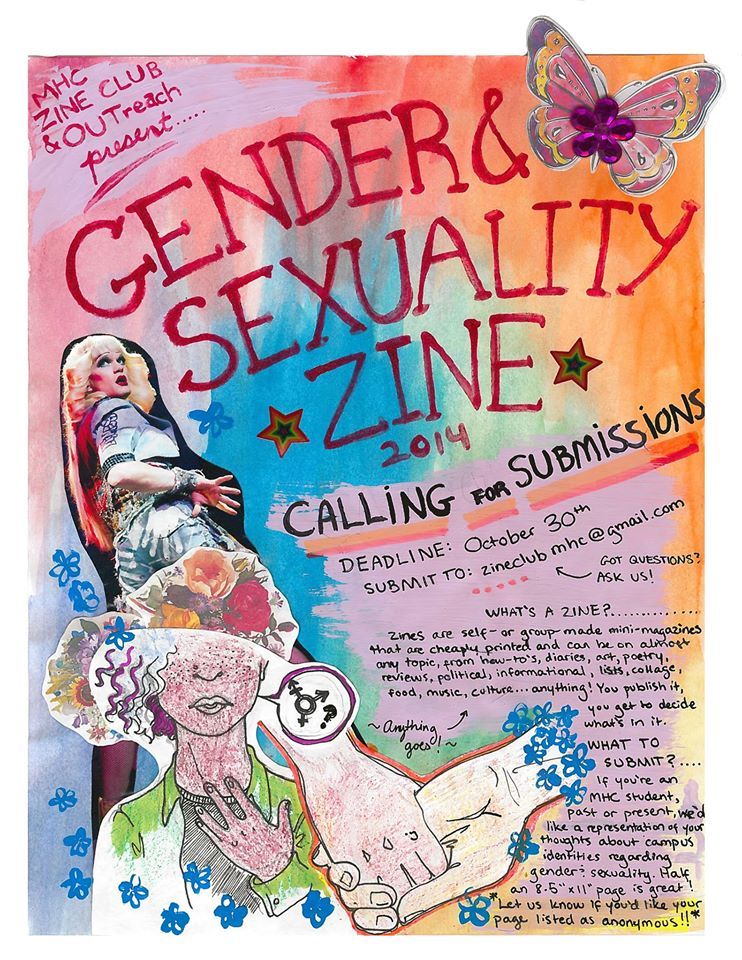 A flyer distributed by the MHC Zine Club and OUTreach about their gender and sexuality zine, October 2014

OUTreach is a student led org that evolved from True Colors. One of the founders had the following to say about the org:

"I, Melina Baron-Deutsch, opted to be the chair of OUTreach after being very disappointed with True Colors (a historic LBGTQ umbrella org on campus) in years past -- namely its racist, masculinist, sex-mandatory nature that I noticed it was promoting. Since becoming an active board member of OUTreach, I, along with Iyanna James-Stephenson, Zoe Goodwin, Roddy Jacobson, Brooke Hyunh and Caleb Teachey, changed the name from True Colors to OUTreach and the mission statement to include a broader range of identities in our focus (such as race, class, religion, and ability) as well as the goal of community collaboration.

During our first two semesters as OUTreach (Fall 2014-Spring 2015), we've collaborated with Familia, SAMI (Students Against Mass Incareceration,) Femmepowered, the Eliot House, and the Conscious Poets. We got Lyon's Pride to consider renaming the Jolene Fund to honor the gender of the alum it is named after. We sold out ticket sales for Drag Ball and got many people across campus involved in its planning. We created a scholarship for local high school students to attend Camp Outright, a Vermont-based LGBTQ+ summer camp. We produced a zine on Gender and Sexuality at MHC in the fall and one on Race and Class at MHC in the spring semester. We hope to continue to grow and seek new ways to best interact with and fit the community we find ourselves in." 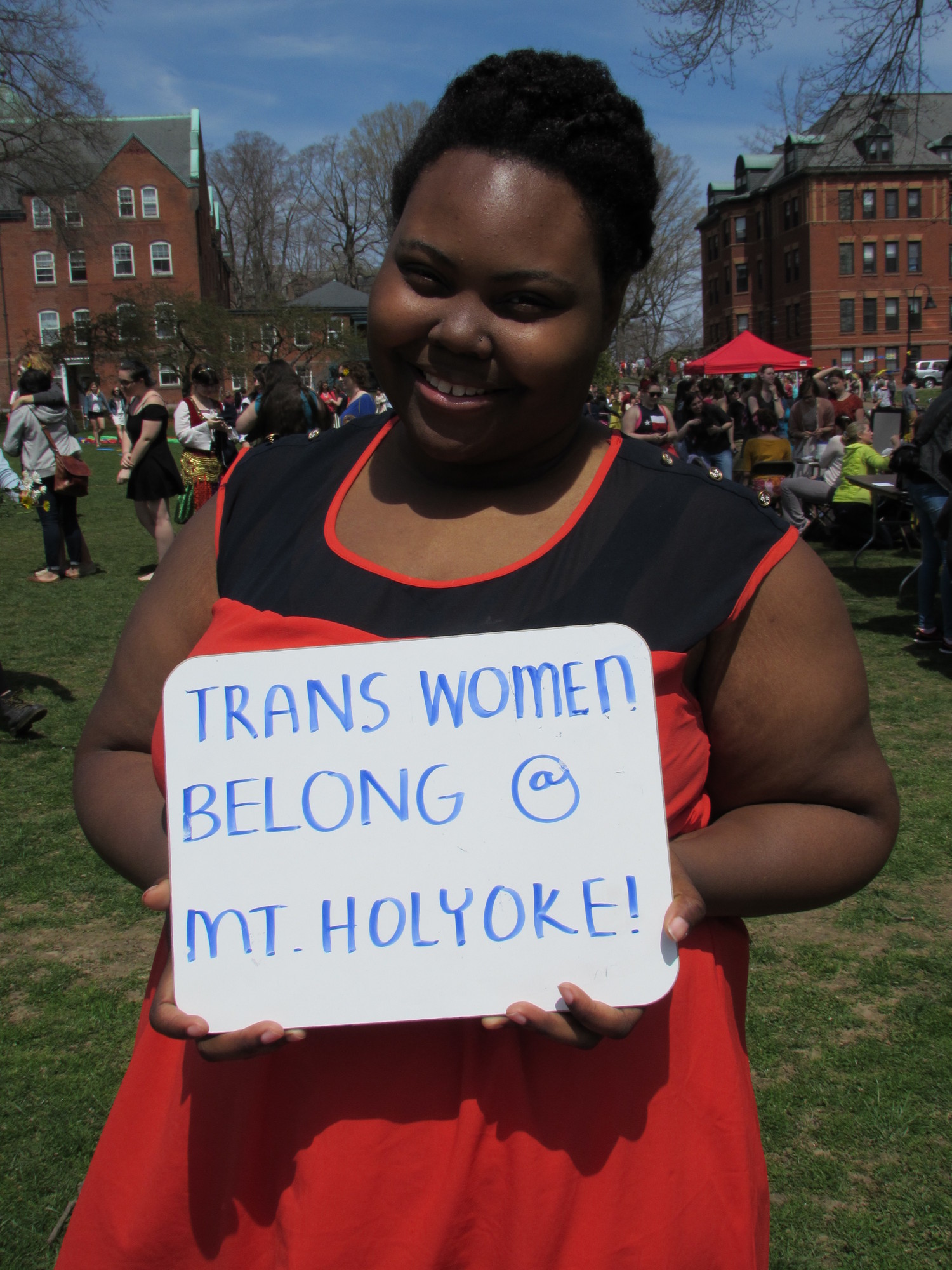 Familia is a closed space for queer people of color at Mount Holyoke. The following is an excerpt from a zine about the organization:

"QPOC have long been involved with LGBTQ organizing at the college. Though few records remain in the archives due to restrictions and institutionalized racism, available records note QWOC were actively involved in the historic Lesbian Bisexual Alliance, and edited papers like La Libertad. The forerunner to Familia was SYSTA, which was created in 1994 out of an atmosphere of racism and discrimination among other LGBTQ orgs on campus. It operated as a confidential space for LGQ-identified QOC. They also helped create the Marks House. Today, Familia operates as a closed space for queer-identified people of color on campus. The organization meets in the Jeanette Marks House weekly, and hosts communal dinners, workshops, special events and more."

The fourth org is COGA, the Coalition for Gender Awareness. COGA was founded in the early 2010s as a recognition of the gender diversity at MHC. They hold weekly meetings with discussion topics, poster making events, and more. In the fall of 2014, COGA members got together with Open Gates members to write a newspaper column about the new trans admission policy. They have hosted ResLife sensitivity training events, distributed a campus wide flyer called "Who's that Dude on Campus?" and helped students navigate name changes. Although the current members (as well as the Archives) don't have a lot of information about the founding of COGA, we would love to learn more! If you know anything about how COGA was founded, please contact the Archives.

← A Decade with Nothing
More to Add? →
Today and Tomorrow